Greenfields and Brownfields Exploration at the Tritton Copper Operations (NSW) 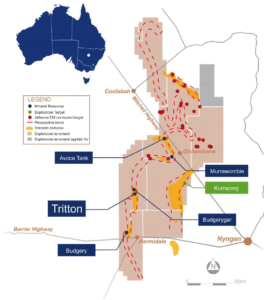 The nearby Canbelego Project (Aeris 30%) is held through a Joint Venture with Helix Resources.

The greenfields exploration strategy within the Tritton tenement package is based on growing the operation through the discovery of large Tritton or Murrawombie-sized deposits of more than 10 million tonnes.

Prior to 2016, greenfields exploration at Tritton was sporadic and punctuated with prolonged periods focused on resource definition drilling at the Tritton, Murrawombie, North-East, Larsens and Avoca Tank deposits. However, in mid-2016, Aeris commenced a strategic two-year $7.5 million greenfields exploration program. The program, which commenced in November 2016 and ran until early in 2019, included:

In December 2018, an airborne electromagnetic (AEM) survey was flown, covering 617km2 over the northern half of the tenement package. The AEM survey, utilising the SKYTEMTM 312 airborne EM system, was designed and optimised to test for deep conductive bodies. The AEM survey identified 25 new anomalies and confirmed the Company’s view that there is significant potential to discover additional copper sulphide deposits in the northern half of the Tritton tenement package.

In the context of base metal deposits within the Girilambone basin, the Tritton deposit represents a very large mineralised system. The copper sulphide mineralised footprint has been traced over 1.9 kilometres down plunge based on current drilling data. The deposit remains open down plunge.

As the mineralised system continues at depth the geological characteristics of the deposit have changed. The upper two thirds of the deposit between 5,130mRL to 4,300mRL is characterised by an approximate 5 to 20 metre thick north-south trending massive sulphide to banded sulphide dominant lens.

Estimated copper block grades typically range from 2% to 5% copper. Below the 4,300mRL level the sulphide body becomes thicker (30 to 80 metres) and transforms into an east–west trending elliptical body. The change in thickness and orientation is associated with a north-west – south-east trending fold corridor which migrates across the orebody below the 4,300mRL level.  The distribution of copper mineralisation also changes forming higher grade (+1.5% copper) and low grade (<0.5% copper) corridors.  Massive sulphide textures become less frequent, replaced by disseminated, stringer/stockwork and banded textures.

Following a period of geological interpretation, the Tritton geology model has been updated to reflect the changing geology at depth below the 4,300mRL.  Whilst the macro scale geometry change was clear, controls on the internal distribution of high-and-low grade copper mineralisation and their spatial continuity has taken longer to unravel.  The updated geology model provides an improved understanding of the potential grade profile below the current mining front (4,110mRL level) and the spatial location of potential higher-grade corridors.

Drill coverage becomes progressively sparse down to the limit of drill coverage at the 3,850mRL level. Importantly the Tritton mineralised system remains open with drill holes continuing to exhibit high grade and low grade copper horizons.  The revised geological model has been incorporated into an updated Mineral Resource estimate. 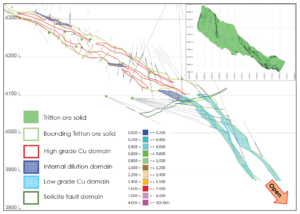 Cross section through the lower half of the Tritton mineralised system

The Budgerygar deposit (Budgerygar) is hosted within the Tritton stratigraphic package and located approximately 600 metres north of the Tritton deposit.

Mineralisation is characterized by a large pyrite dominate sulphide envelope (5 metres to 50 metres) striking north-south and dipping moderately east.  Cooper mineralization is dominated by chalcopyrite and covers a strike length of 300 metres and traced 800 metres down dip.  The sulphide envelope defining the Mineral Resource remains open at depth and along strike to the north.

An exploration access drive from the Tritton Underground Mine across to the Budgerygar Deposit will commence in the coming 1st quarter of Fy2021.  The exploration drive will provide a drill platform for resource definition drilling and conversion of the current Inferred Mineral Resource to an Indicated Mineral Resource category.

The Budgerygar deposit is made up of four discrete lodes.  Planned drilling off the exploration drive will target the upper extensions of all four lodes within a 350 metre vertical window from 5,250mRL to 4,900mRL.  Planned drilling will also test for additional mineralisation peripheral to the modelled lodes.  Historical drilling intersected several encouraging Cu sulphide intersections in the footwall (FW) to the modelled lodes including 4m @ 2.25% Cu (BDN017), 3m @ 2.57% Cu (BDN017), 5m @ 2.68% Cu (BDN024) and 2m @ 2.07% Cu (BDN024).

During the quarter an updated geological interpretation and three dimensional (3D) model was completed for the Murrawombie deposit.  Revision of the existing geological model was warranted following the continued success of exploration drill holes intersecting copper mineralisation in the HW to the main 102 and 108 lodes (refer to ASX announcements 21st August 2019, 29th January 2020, 27th February 2020 and 28th April 2020).  The updated geological interpretation has culminated in the identification of three new copper sulphide lodes.  The new lodes are referred to as lode 111, lode 113 and lode 115.

The newly defined HW lodes are based on a combination of lithology, alteration assemblages and sulphide accumulations.  There is evidence of some structural dislocation based on correlation of modelled lithology and alteration units between drill fans.  Refinement of the geological model will be ongoing as additional drilling data is received.

Current dimensions of the HW lodes varies and is dependent on drill coverage.  Lode 115 is the largest of the three HW lodes, having been traced over 200 metres along strike and 230 metres down plunge.  Lodes 111 and 113 do not extend as far south and consequently their current dimensions are reduced.  All three HW lodes remain open along strike (north) and down plunge.  Drilling activities will continue to focus on testing the extents to each HW lode. 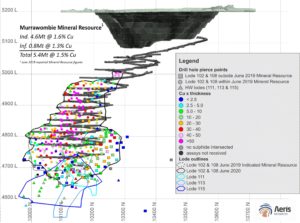 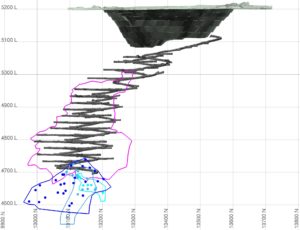 With additional exploration there is significant potential to increase the Mineral Resource base at Murrawombie, both along strike and down plunge.

The deposits discovered on the Tritton tenement package typically have a long down plunge extent and the same is expected to be true at the Avoca Tank deposit. Future exploration drilling of the deposit will be most efficient from an underground platform. However, to assist with feasibility studies, a small drilling program of up to 3 drill holes to test the vertical extension of the deposit is planned. This program has the aim of helping to improve the understanding of the deposit’s structural controls to optimise future underground drilling locations.

The HP MLTEM survey completed over the Kurrajong prospect detected two strong bedrock conductors commencing at 400 metres below surface. The detection of the plates provided the impetus to commence a limited drill program testing the potential extents to mineralisation intersected from previous drilling at the prospect. The initial two holes (TKJD014 and TKJD015) targeted the interpreted mineralised extensions at 150 metres up and down plunge. Both drill holes intersected massive sulphides:

These results were encouraging enough for Aeris to extend the drill program with a further 12 drill holes completed in November 2018. The drilling program extended the limits of sulphide mineralisation to 300 metres along strike and 1,100 metres down plunge.

Within the large sulphide envelope, an exploration target was defined ranging from 3 to 4 million tonnes at 1.5% to 2.0% copper.

The Company has now commenced the process to obtain the necessary regulatory approvals to allow further drilling to occur at Kurrajong with the aim to progress the exploration target to an Inferred Mineral Resource. 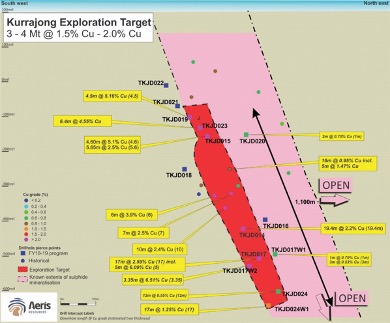 To date, the majority of the on-ground exploration within the Tritton tenement package has been focussed within the southern half, along the prospective “Budgery Sandstone” corridor between the Budgery and Avoca Tank deposits.

Recent regional mapping and follow-up geophysical interpretation over the northern half of the tenement package was successful in identifying the continuation of the Budgery Sandstone unit for a further 65 kilometres than originally thought. Additionally, the prospective corridor was interpreted to extend a further 40 kilometres further northwest, into an area now covered by EL 8810.

A second AEM survey covering the remainder of the under-explored northern half of the tenement package (617km2 – excluding EL8810) was flown in January 2019 and identified a further 25 EM anomalies, including 9 high-priority targets. The airborne EM survey was flown using the SKYTEMTM 312 EM system, which is designed and optimised for deep conductor bodies. This system enabled exploration to quickly and cost-effectively identify potential copper sulphide mineralisation.

A ground based moving loop electromagnetic (MLTEM) surveying was completed over the AEM conductive bodies.  The MLTEM survey was designed to filter out the AEM anomalies which are legitimate bedrock conductors from those which are related to noise or near surface cover responses.

Aeris’ exploration focus on the Tritton tenement package within FY2020 is principally within the northern half of the tenement package, focusing conductive bodies detected from AEM and MLTEM geophysical surveys.

Assay results were returned during the quarter for drillhole TCBD010. The drillhole targeted down plunge mineralised extensions at the Caribou prospect (located within the Larsens – Northeast mining province).

Drillhole TCBD010 intersected a broad zone of pyrite +/- chalcopyrite disseminations and minor stringer veins 100 metres down plunge to the known mineralised system. Copper assays over the broad interval reported 36.0m @ 0.10% Cu. Strong chlorite alteration was observed throughout the sulphide interval, which is commonly observed in close association to known mineralised systems elsewhere in the region.

A downhole EM (DHEM) survey was completed down TCBD010. The DHEM survey detected an off-hole conductor above the drillhole, which corresponds with the mineralised zone intersected from previous drilling. The modelled plate extends further down plunge than previously modelled DHEM plates (combined total plunge extent 200 metres).

The drill results and modelled DHEM plates at the Caribou prospect are encouraging and may reflect a similar mineralised system to the Larsens deposit2 (~1Mt @ +2% Cu), located 300 metres to the west. 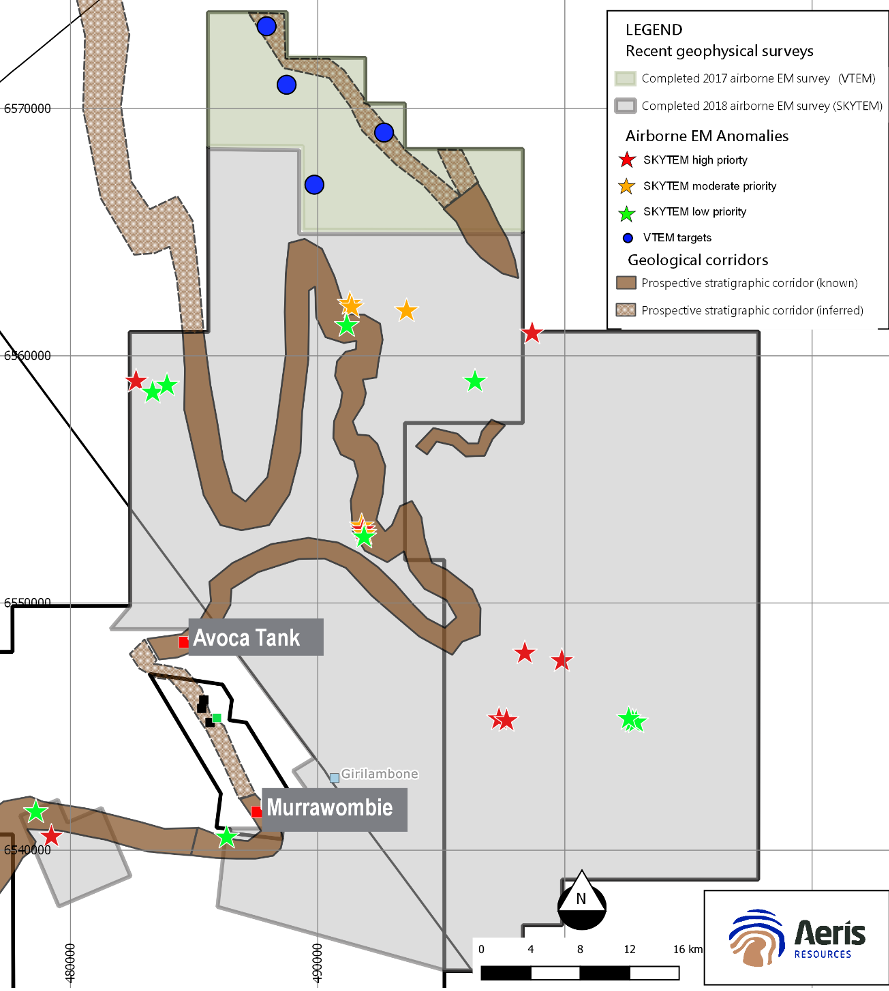 A modest drill campaign, totalling three drillholes was completed within the Murrawombie to Avoca Tank prospective corridor following the completion of a geological review and additional MLTEM survey data.  Two drillholes targeted geophysical anomalies, one 1.5 kilometres north west from Murrawombie and the other 500 metres south of Avoca Tank. The third drillhole targeted down plunge extensions to mineralisation at the Caribou prospect (located within the Larsens – Northeast mining province).    Previous exploration drilling activities at the Caribou prospect intersected variable amounts of copper sulphide mineralisation with several encouraging results including;

Drillhole TCBD010 was drilled targeting 100 metres down plunge to the known mineralised system.  The drillhole intersected a broad zone of pyrite +/- chalcopyrite disseminations and minor stringer veins (total sulphide content <5%) over an approximate 40 metre interval (assays pending).  Strong chlorite alteration was observed throughout the sulphide interval which is commonly in close association to mineralised systems elsewhere in the region.

A downhole EM (DHEM) survey was completed down TCBD010.  The DHEM survey detected an off-hole conductor above the drillhole which corresponds with the mineralised zone intersected from previous drilling.  The modelled plate extends further down plunge than previously modelled DHEM plates (combined total plunge extent 200 metres).

The drill results and modelled DHEM plates at the Caribou prospect are encouraging and may reflect a similar mineralised system to the Larsens deposit (~1Mt @ +2% Cu), located 300 metres to the west. 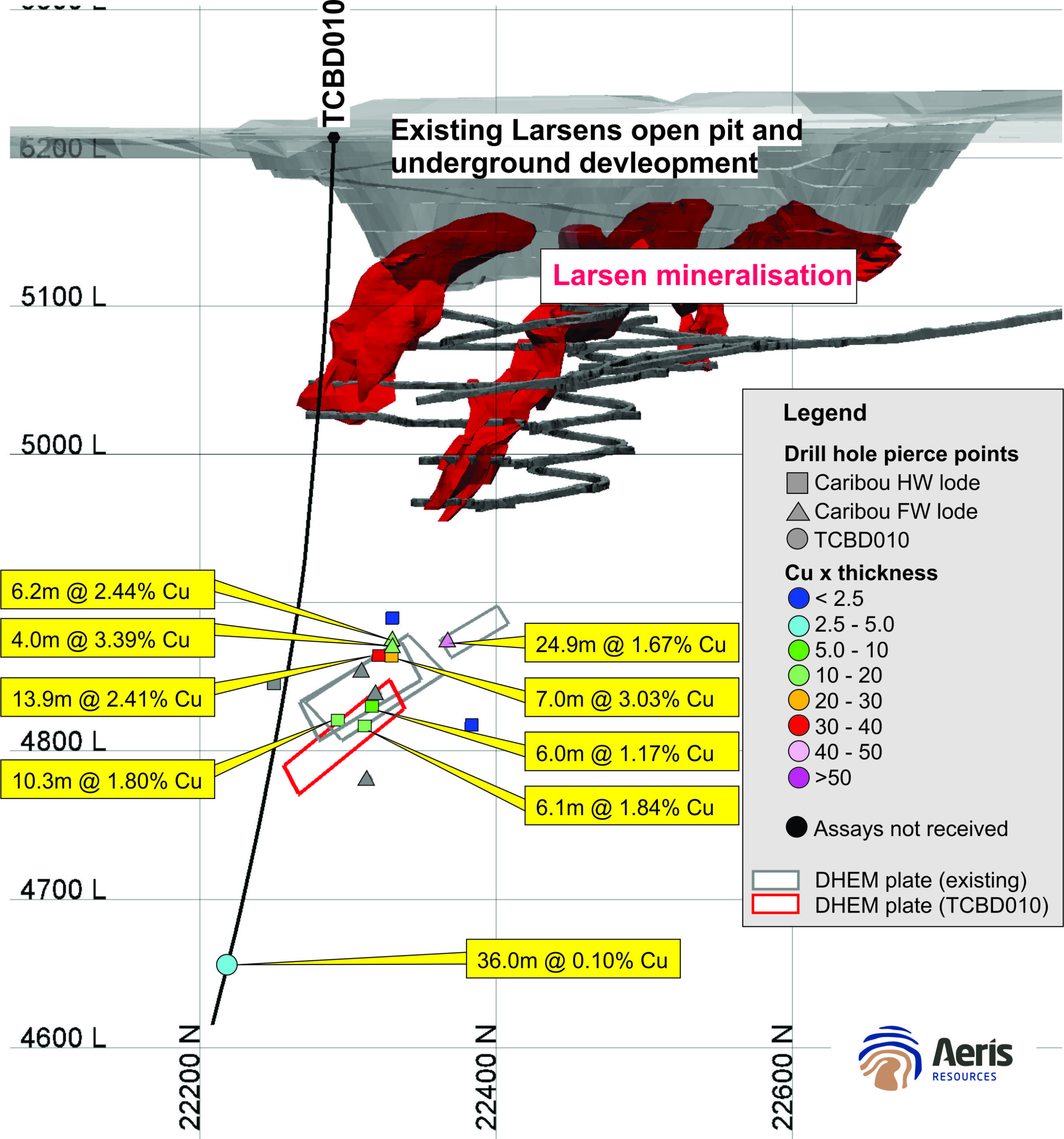