Aeris Resources are 100% owners and operators of the Tritton Copper Operations located near the town of Nyngan in central New South Wales, the Cracow Gold Operations located in Queensland, and are a 70% owner of the Torrens Copper Project Joint Venture in South Australia.

The Tritton Copper Operations is operated by Tritton Resources Pty Ltd, a 100 per cent owned subsidiary of Aeris Resources Limited.

The significant capital program for the FY2020 year was predominantly focused on continuing to develop Murrawombie. Investment in the underground mining equipment fleet continues as part of sustaining capital with several mid-life rebuilds. 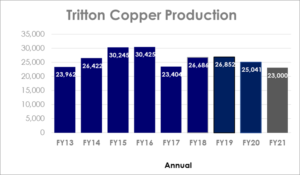 History of the Tritton Copper Operations

Mining within the Tritton area in modern times began in 1992 at the Murrawombie open pit and heap leach operation by the Girilambone Copper Company, a Joint Venture between Straits Resources (now Aeris) and Nord Pacific. The Girilambone Copper Company eventually became a wholly owned subsidiary of Straits Resources. Operations at the Girilambone copper project involved the mining of several open pits to recover copper oxide ore that was treated by heap leach, followed by solvent extraction and electrowinning processing to produce copper cathode. The Murrawombie pit was the largest of the mines. Open pit mining at Girilambone ended in 1999, although copper cathode production continued for two more years.

Leaching of residual copper from the Murrawombie heap leach continues today. Approximately 200 tonnes per year of copper is extracted from the leach solution as a copper cement by reaction with scrap iron.

Exploration by the Straits Resources and Nord Joint Venture resulted in the discovery of the Tritton deposit in 1995 as part of an exploration program focused on the historical Budgerygar and Bonnie Dundee copper-gold mines. Geophysical techniques were successful in identifying the buried Tritton deposit 800 metres to the south of these historical workings. Tritton Resources Limited was formed to develop the Tritton deposit. Tritton Resources Limited was for a time listed as an independent company on the Australian stock exchange, before being privatised as a subsidiary of Straits Resources.

Aeris Resources is the 100% owner of the Cracow Gold Operations, located approximately 500 kilometres northwest of Brisbane, nearby to the communities of Cracow and Theodore and on the traditional lands of the Wulli Wulli.

On 4 June 2020, Aeris announced the acquisition of the Cracow Gold Mine from Evolution mining. The acquisition was completed on 1 July 2020. Cracow is an established, high grade, low cost underground gold mining and processing facility. The mine has been operating continuously since 2004, producing more than 1.4 million ounces over its life, with a consistent track record of profitability and reserve replacement.

The mine is accessible by sealed roads connecting to Biloela and major regional highways via Theodore and is supplied with reliable power from the grid and water under licence from the Dawson River.

The mine is in a highly endowed goldfield with gold mineralisation hosted in steeply dipping, structurally controlled low sulphidation epithermal veins. Producing ore at 4.80g/t, Cracow continues to be a high-grade, consistent and reliable operation with a proven track record of extending the mineralisation and mine life. The current mine life expected to last until 2023. Aeris plans to explore the 13 tenements that it purchased as part of the Cracow deal.

Mining at Cracow takes place in multiple underground orebodies that are accessed by a single decline from surface with ore primarily mined via open stoping through a modified Avoca mining sequence.   Truck haulage to extend mine life for materials ore handling to the ROM. Current mine activities have extended to a depth of 860 metres below surface, and the typical mining method used is modified Avoca bench sloping, although multiple mining methods such as uphole retreat, open stoping, flat backing and benching are also used.  Processing is via a 570 ktpa capacity facility involving conventional crushing and grinding, followed by a leaching / CIP circuit to recover gold and silver doré.

Cracow has a strong track record of ore reserve and mineral resource replacement and Aeris plans to invest in brownfield and greenfield exploration with the aim of growing the resource base to extend mine life. Multiple near term opportunities for resource conversion have been identified with some $13 million budgeted over the next two years for exploration, with key priorities including both underground near mine extensions (e.g. Killarney) as well as nearby open pit deposits (e.g. the Golden Plateau and Roses Pride).

History of the Cracow Operations

Gold was first discovered in the Cracow area in 1875 by itinerant fossickers and, in 1931, the Golden Plateau mine was established, which produced 850,000oz through to 1992. Modern mining activity in the Cracow area started in 2002, after joint venture partners Newcrest and Lion Selection (70:30) approved the development of an underground mine and refurbishment of the existing treatment plant. First modern era gold production at Cracow began in November 2004.

In 2011, Conquest Resources Limited and Catapla Resources Limited merged to form Evolution Mining which acquired Cracow during the concurrent purchase of Newcrest Mining Limited’s interests in the Cracow and Mt Rawdon gold mines in Queensland in 2011. Lion Mining Pty Ltd, 100% owner of Cracow became subsidiary of Evolution Mining  in November 2011. In 2018, resource definition drilling focused on extension and further delineation of the Coronation, Baz, Imperial, Griffin and Killarney structures, resulting in the addition of 150,000oz to the ore reserve.

Aeris purchased the Cracow mine from Evolution in June 2020.