Aeris Resources purchased the Cracow mine from Evolution Mining in June 2020. 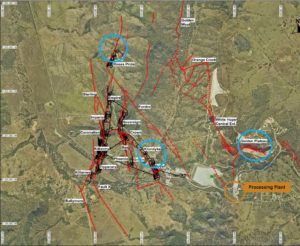 Cracow has been a consistent and reliable operation, producing a total of 1.4 million ounces of high-margin gold since mining began in 2004. The current mine life is out to 2023, however Cracow has a strong track record for replacing ore reserves, and Aeris has a $13 million exploration budget planned to develop the Killarney, Kenneth and Sterling brownfields targets, and the Ballymore, Northwest Corridor and Boughyard greenfields regional opportunities.

The mine is located, in a highly endowed goldfield with gold mineralisation hosted in steeply dipping structurally controlled low sulphidation epithermal veins.  All mining is currently by underground narrow vein methods. There has been historical open pit mines at several locations on the property but no active pit mining. Future production will be from a combination of underground and open pits. The open pit projects being taken forward to pre-feasibility study are;

Underground mine production is from several of the known deposits in the field all connected by underground drives to the one portal at surface. Ore is produced using narrow vein bench stoping, occasional cut and fill stopes, and up-hole retreat benching. Dry rock fill is used as the most common backfill. Where required a cemented rock fill will be placed to allow for pillar recovery. The stoping method is described as Avoca or Modified Avoca depending on the access constraints.

Over a two-year period, to 30 June 2022, Aeris expects Cracow to generate more than $100 million of net mine cashflows at the current gold price, with pro forma Aeris group EBITDA of $272 million to $282 million and pro forma group net cash flows of $137 million to $155 million.

The Cracow processing plant consists of a three-stage crushing circuit, primary and secondary ball milling, pre-leach thickening, fine grinding and conventional cyanidation leaching (CIP). The dorē gold bars produced from the plant are then sold to the ABC Refinery in Sydney.