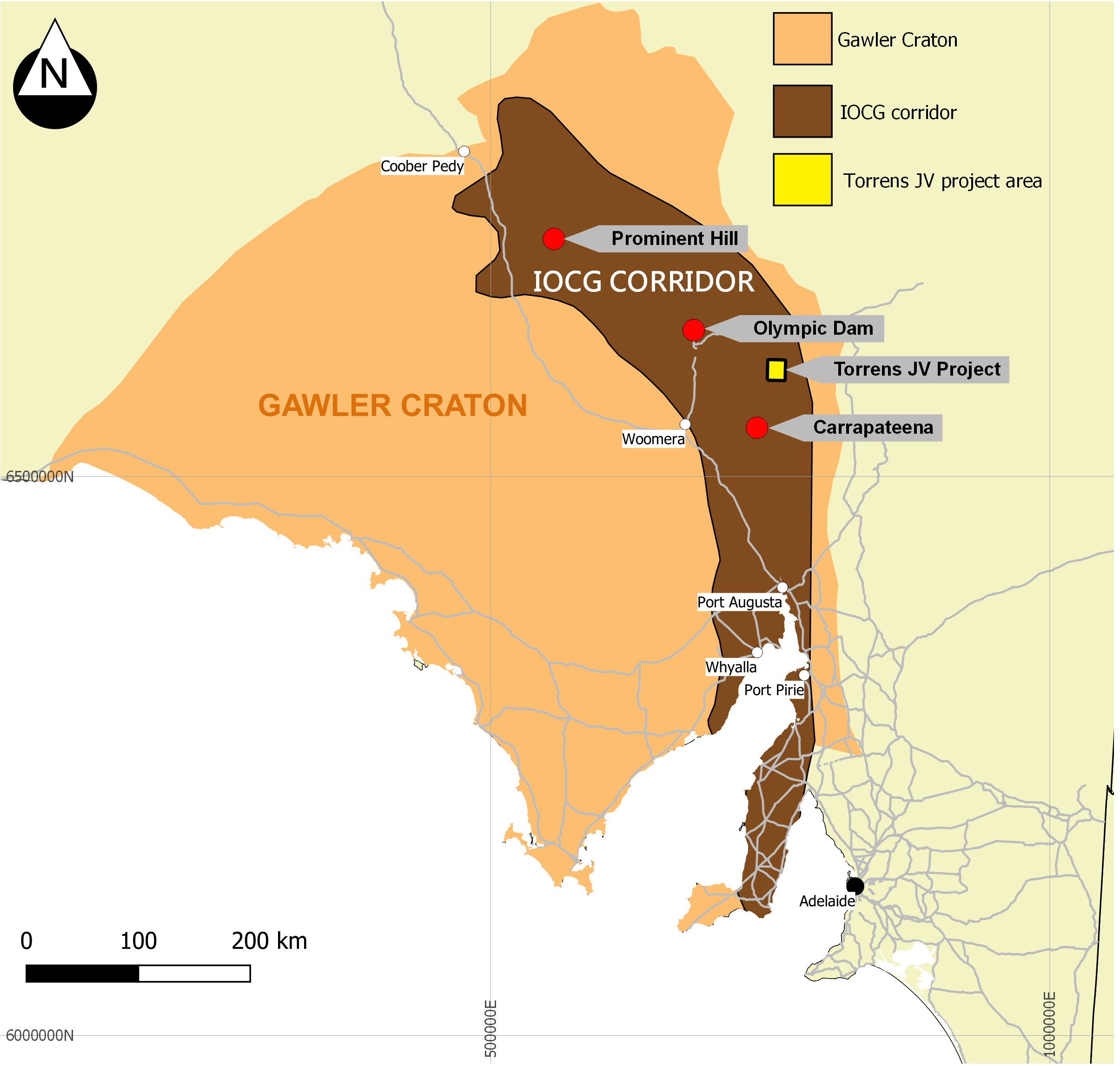 EL5614 is located within the highly prospective Stuart Shelf region of South Australia and lies within 50 kilometres of Oz Minerals’ Carrapateena deposit, 75 kilometres from BHP’s Olympic Dam mine and approximately 50 kilometres from BHP’s recent Oak Dam discovery.  The Torrens Project covers a large regionally significant coincident magnetic and gravity anomaly with a footprint in excess of 120km2.

Limited drilling, totalling only six drill holes between 1977 and 2008, defined a large magnetite dominant with lesser hematite alteration system interpreted to form the distal component of an IOCG system.  Zones of anomalous copper mineralisation (≥0.1% Cu) were intersected from several drill holes with the most significant mineralised zone associated with TD2 (246m @ 0.1% Cu).

In January 2019, on-ground exploration activities recommenced in the form of a heliportable drill program.  The drill program, designed to minimise ground disturbance on Lake Torrens, utilised a series of lightweight aluminium work platforms bolted together to form a base on which the drill rig was positioned.  Access to and from the drill sites was via helicopter and an exploration camp to accommodate the workforce for the Phase 1 drilling program became fully operational during January 2019.  The target geology sits under approximately 400 to 700 metres of cover with target drill hole depths ranging from 700 to 1,500 metres.

The first drill hole, TD7 was successfully completed to target depth.  It had targeted a coincident magnetic and gravity anomaly defined from the FALCON geophysical survey flown early in 2018.  TD7 was located approximately 1.5 kilometres from the shoreline (western margin) of Lake Torrens and was drilled to a total depth of 858.6 metres. Preliminary geology observations of TD7 included a 60 metre wide non-magnetic intersection containing hematite, plus K-feldspar and sericite alteration. Hematite is recognised as an accessory mineral associated with all known IOCG mineralised systems within the Gawler Craton.

Assay results from TD7 reported no significant copper mineralisation with the highest-grade interval being 20m @ 0.15% Cu from 542 metres downhole, though the presence of elevated cerium concentrations that were intersected toward the bottom of the drill hole were encouraging. Cerium and other rare earth elements (REE) are considered important geochemical vectors toward potential IOCG systems.

Both TD8 and TD9 intersected an unexpected artesian aquifer at approximately 70 metres to 100 metres below surface.  Both drill holes were terminated at the aquifer and fully remediated.

A thorough review of the drill protocols was completed after drill hole TD9, with updated protocols successful in managing the artesian water and running sands associated with the aquifer when undertaking drill hole TD10.  This hole, targeting the same coincident gravity and magnetic anomaly as its predecessor (TD9), successfully reached the target depth of 1,200 metres.  The drill hole intersected highly altered K-feldspar, magnetite and pyroxene rich intervals with trace amounts of sulphides (predominately pyrite) but no significant copper mineralisation.Limited drilling, totalling six drill holes between 1977 and 2008 defined a large magnetite dominant with lesser hematite alteration system interpreted to form the distal component of a large IOCG system.  Zones of anomalous copper mineralisation (≥0.1% Cu) were intersected from several drill holes with the most significant mineralised zone associated with TD2 (246m @ 0.1% Cu).

Prospectivity within the project area remains high, however the current geological work completed has indicated the geophysical responses associated with an IOCG mineralised system are more subtle than previously thought. Further technical geological analysis is required to refine the geological interpretation to ensure the most prospective anomalies are prioritised for targeting. Drilling activities have been paused while this technical review is undertaken.

Several areas currently outside of the permissible area for drilling, including one which is located on land immediately west of Lake Torrens, show encouraging geophysical characteristics. The Joint Venture has commenced the process for obtaining the necessary regulatory approvals to allow drilling to occur within each of these areas.

The unique pontoon-supported drilling platform was successful in enabling drilling on the surface of Lake Torrens, however operating costs per hole were higher than originally targeted. While the technical review is being undertaken, the Company will also take the opportunity to rigorously review operational practices and costs. 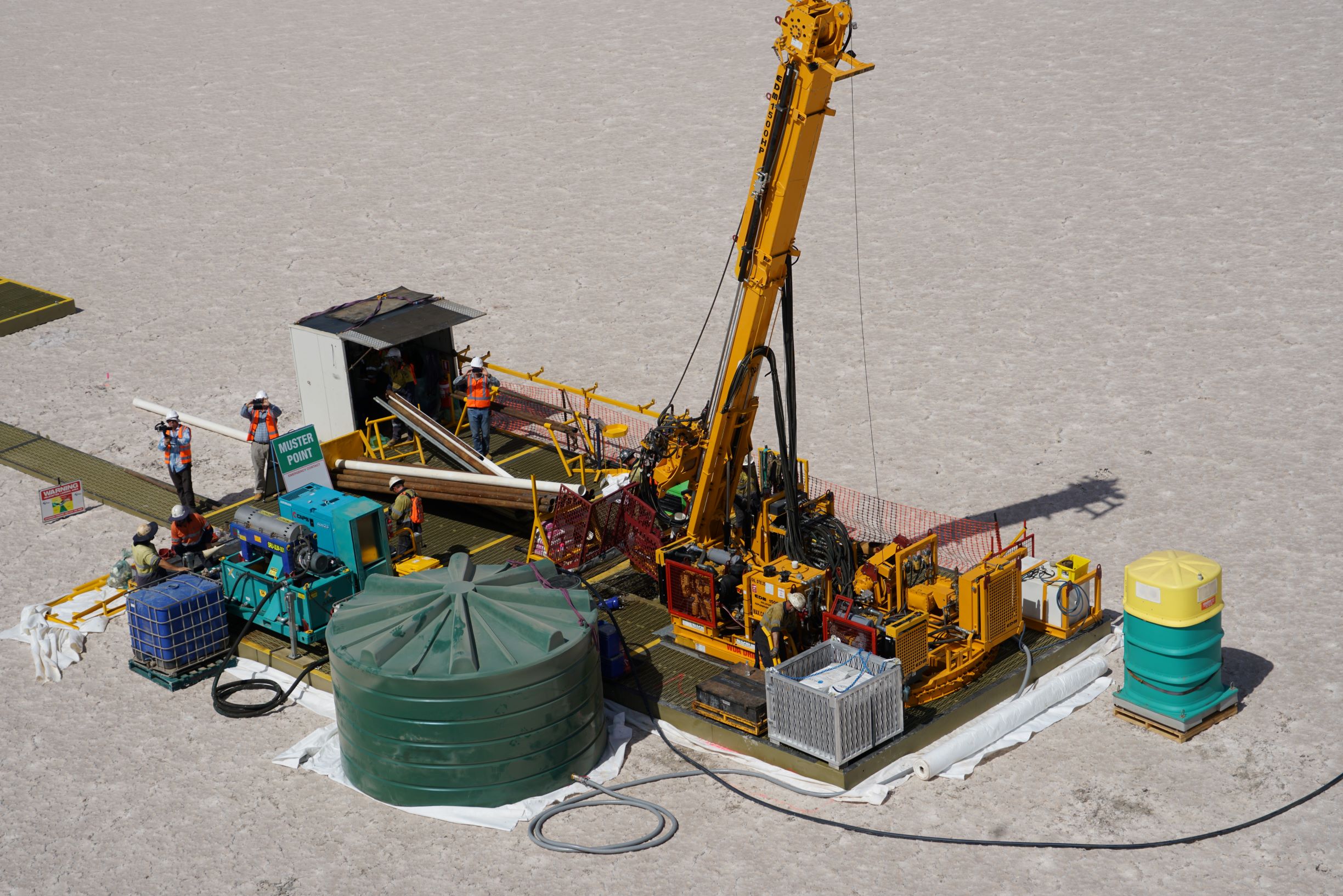