The Tritton Copper Operations located near the town of Nyngan in central New South Wales is operated by Tritton Resources Pty Ltd, a 100 per cent owned subsidiary of Aeris Resources Limited.

The significant capital program for the year just completed has been predominantly focused on continuing to develop Murrawombie. Investment in the underground mining equipment fleet continues as part of sustaining capital with several mid-life rebuilds. 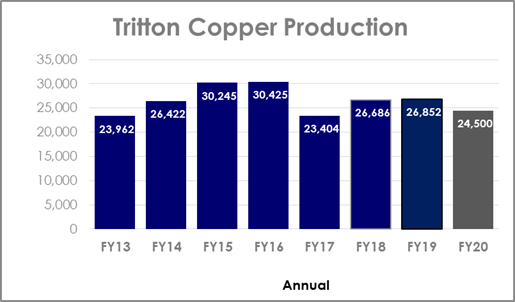 History of the Tritton Copper Operations

Mining within the Tritton area in modern times began in 1992 at the Murrawombie open pit and heap leach operation by the Girilambone Copper Company, a Joint Venture between Straits Resources (now Aeris) and Nord Pacific. The Girilambone Copper Company eventually became a wholly owned subsidiary of Straits Resources. Operations at the Girilambone copper project involved the mining of several open pits to recover copper oxide ore that was treated by heap leach, followed by solvent extraction and electrowinning processing to produce copper cathode. The Murrawombie pit was the largest of the mines. Open pit mining at Girilambone ended in 1999, although copper cathode production continued for two more years.Leaching of residual copper from the Murrawombie heap leach continues today. Approximately 200 tonnes per year of copper is extracted from the leach solution as a copper cement by reaction with scrap iron.

Exploration by the Straits Resources and Nord Joint Venture resulted in the discovery of the Tritton deposit in 1995 as part of an exploration program focused on the historical Budgerygar and Bonnie Dundee copper-gold mines. Geophysical techniques were successful in identifying the buried Tritton deposit 800 metres to the south of these historical workings. Tritton Resources Limited was formed to develop the Tritton deposit. It was for a time listed as an independent company on the Australian stock exchange, before being privatised as a subsidiary of Straits Resources. 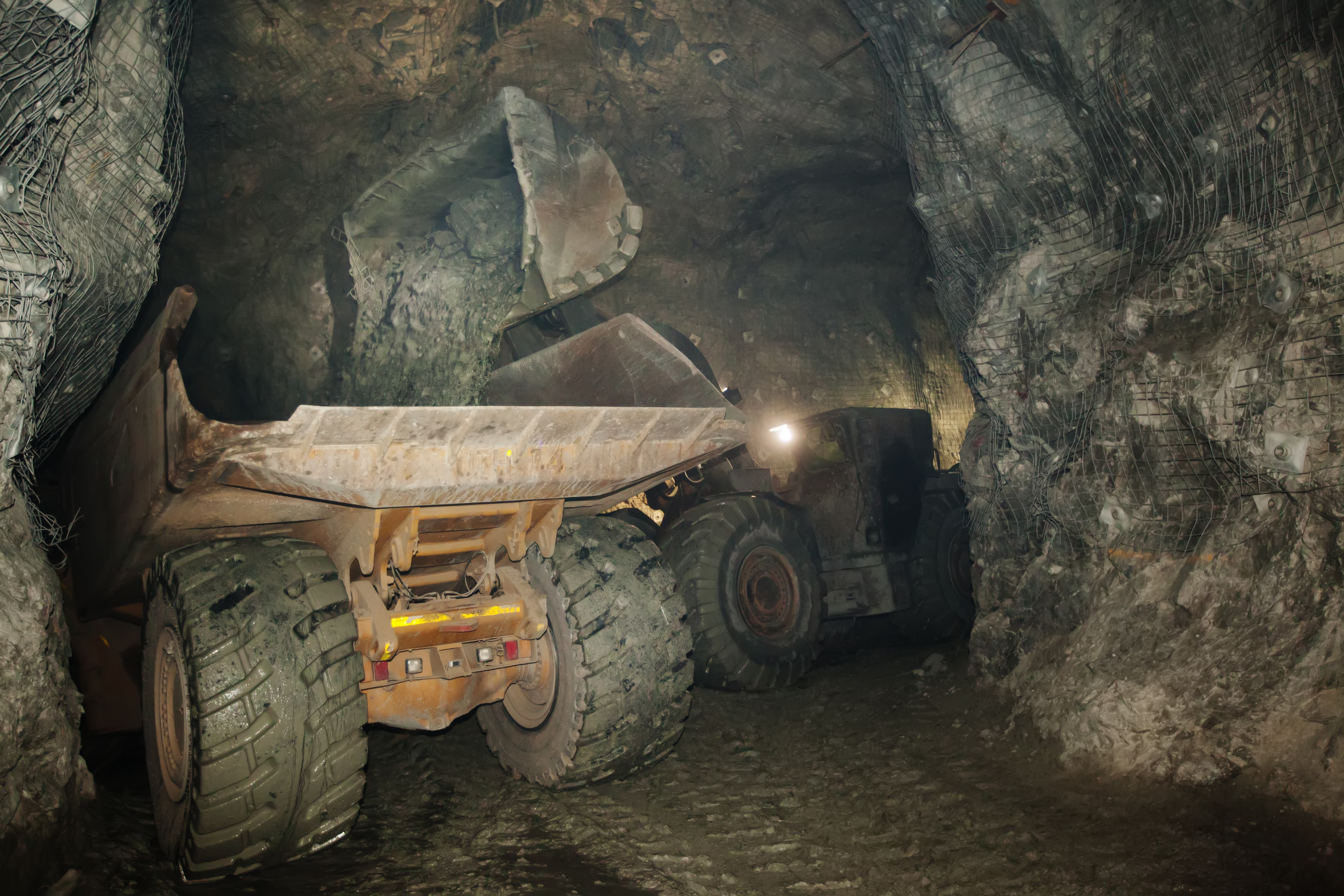 Mining at Tritton Underground Mine

Mining methods at the Tritton underground operations included sublevel open stoping or retreating bench stoping.  Stope orientation is transverse and longitudinal depending on the geometry of the ore lenses.  Backfill at the Tritton mine is cemented paste fill from reused mill tailings.

Ore from Murrawombie is trucked 30 kilometres by road train to the Company’s 1.8 million tonne per annum processing plant, located near the larger Tritton mine. Here the ore is processed through conventional crushing and flotation methods, producing a clean copper concentrate.

Stope design and orientation of the extraction sequence was changed in late 2017 through to 2018, to accommodate the evolving orebody geometry and increasing ground stress, with the revised stoping design delivering stable stope production in 2019. The rock stress issues which emerged in the previous stope design have been eliminated. Reliable stope performance has assisted the mine in building and holding sufficient stocks of drilled and broken ore.

A truck loading loop and loading points, elevated to just above the truck tray were constructed on the 4110 RL sub-level, currently the lowest production level in the mine. This has been significant in reducing the truck loading time and hence improving truck haulage productivity. Compared with more traditional plans, the new stope design has significantly increased the total ore tonnes loaded from this one level and as a result, an investment has been made into the loading loop and short ore passes, which were uneconomic in the higher levels of the mine.

Tele-remote loaders are now operated consistently from the surface control room.  An increase in stope size has also made the loaders more productive and reliable in stope loading, with one operator now able to run two machines when the stopes are available. In addition, the 4110 RL sub-level loading loop and ore passes have reduced interaction between stope loaders and the truck haulage activity. All of these design changes have improved the efficiency of loading and haulage activities.

Paste backfill performance was stable for the year. New boreholes and pipelines within the mid-levels of the mine have been established to remove several dog-leg bends, which reduced the pressure losses. Paste fill recipe optimisation continued to balance cement consumption and the paste flow characteristics. The mine team, working with expert consultants, has managed this critical system very well during the year.

In the mid-levels of the mine, there is a small Mineral Resource contained in remnant pillar stopes. Copper grades in the remnant pillar area, which were left unmined before the operation had a paste backfill plant, are 2.6% making them attractive sources of ore. Mining of the remnant pillar stopes commenced in 2018 and has continued in 2019. A significant portion of the old mining voids around the pillars have now been paste backfilled, however working in old mining areas requiring rehabilitation of ground support and new access drives makes the pillar stope extraction very slow. With backfill now placed, the rate of pillar ore mining is planned to increase in FY2020 and FY2021.Tritton reached 10 years of production in 2015 with significant Mineral Resource remaining.

As at 30 June 2019, the combined Measured, Indicated and Inferred Tritton Mineral Resource Estimate is 9 million tonne at 1.3% Cu for 120 thousand tonne of copper metal. Find out more 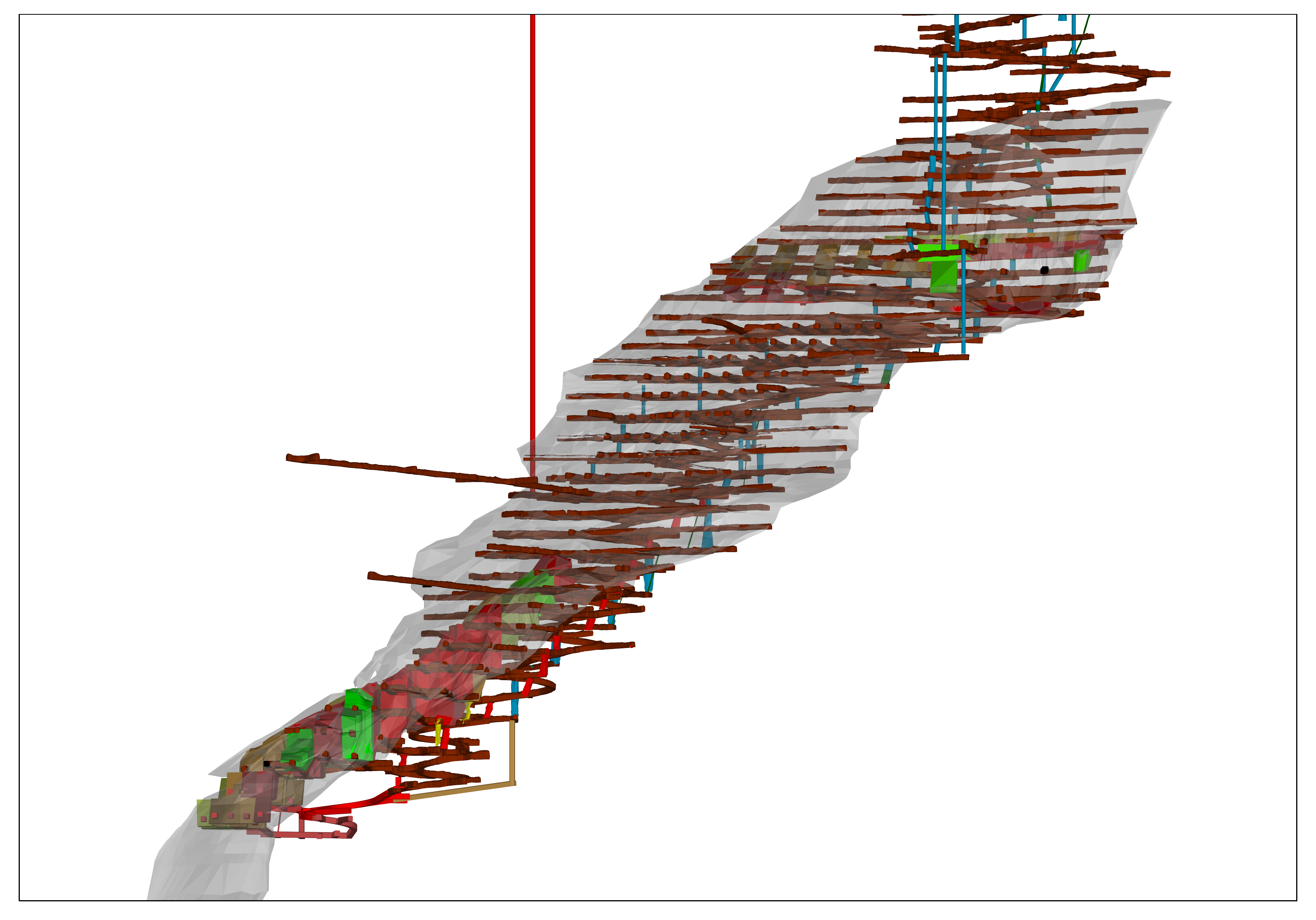 Murrawombie is the secondary production source for the Tritton Copper Operations. Production at commercial rates was achieved in 2018 and was increased in 2019 to 470,000 tonnes.

The mining methods employed at Murrawombie are either small open stopes, or bench stopes, with a combination of cemented and dry rock backfill. Stopes are sequenced in panels for mining from the bottom upwards towards small crown pillars separating the panels. Stope stability and ore extraction have met planned expectations and performance is improving with growing experience in the behaviour of the ore body. Small stopes are being mined so that mining extraction is flexible in consideration of the often-complex detailed geology, with the mining design selected to achieve the optimum balance of grade and resource extraction.

The detailed deposit geology is typical for the area with multiple lenses of mineralisation running roughly in parallel at a modest dip of 40 to 50 degrees. There are three significant mineralised lodes included in the underground mining plan – 102, 105 and 108 lodes – with current production focused on the 102 and 108 lodes that are a higher grade and close together.

Grade control diamond drilling and geology mapping of the ore drives continues to improve the detailed understanding of the deposit geology. Revisions of the resource model using this additional information have occurred during the year, allowing mining to be selective on the higher grade mineralisation. As a result, actual ore production has been of a higher grade than planned.

Murrawombie uses a backfill of cemented rock where mining of adjacent stopes is required. Cemented rockfill preparation and placement is new for the Tritton Copper Operations, with rockfill placement rates achieved exceeding expectations and facilitating more selective mining operations. Exploration drilling undertaken towards the end of the year indicates that the higher-grade zones of the deposit are shifting towards the north. Deposit strike length and lode width are consistent with the current resource models and there is no indication that the deposit is diminishing as it is mined deeper down plunge.

The initial intent for Murrawombie, was for it to be a satellite mine for the Tritton Copper Operations, supporting the main Tritton underground mine and providing top-up feed to the central processing plant. Having multiple mines in production reduces the variation in feed supply to the processing plant, which enables operational optimisation.  Murrawombie has become a high-grade producer in the milling blend and is now considered a co-producer with Tritton.

As at 30 June 2019, the combined Measured, Indicated and Inferred Murrawombie Mineral Resource Estimate is 5.4 million tonne at 1.5% Cu for 83 thousand tonne of copper metal. Find out more 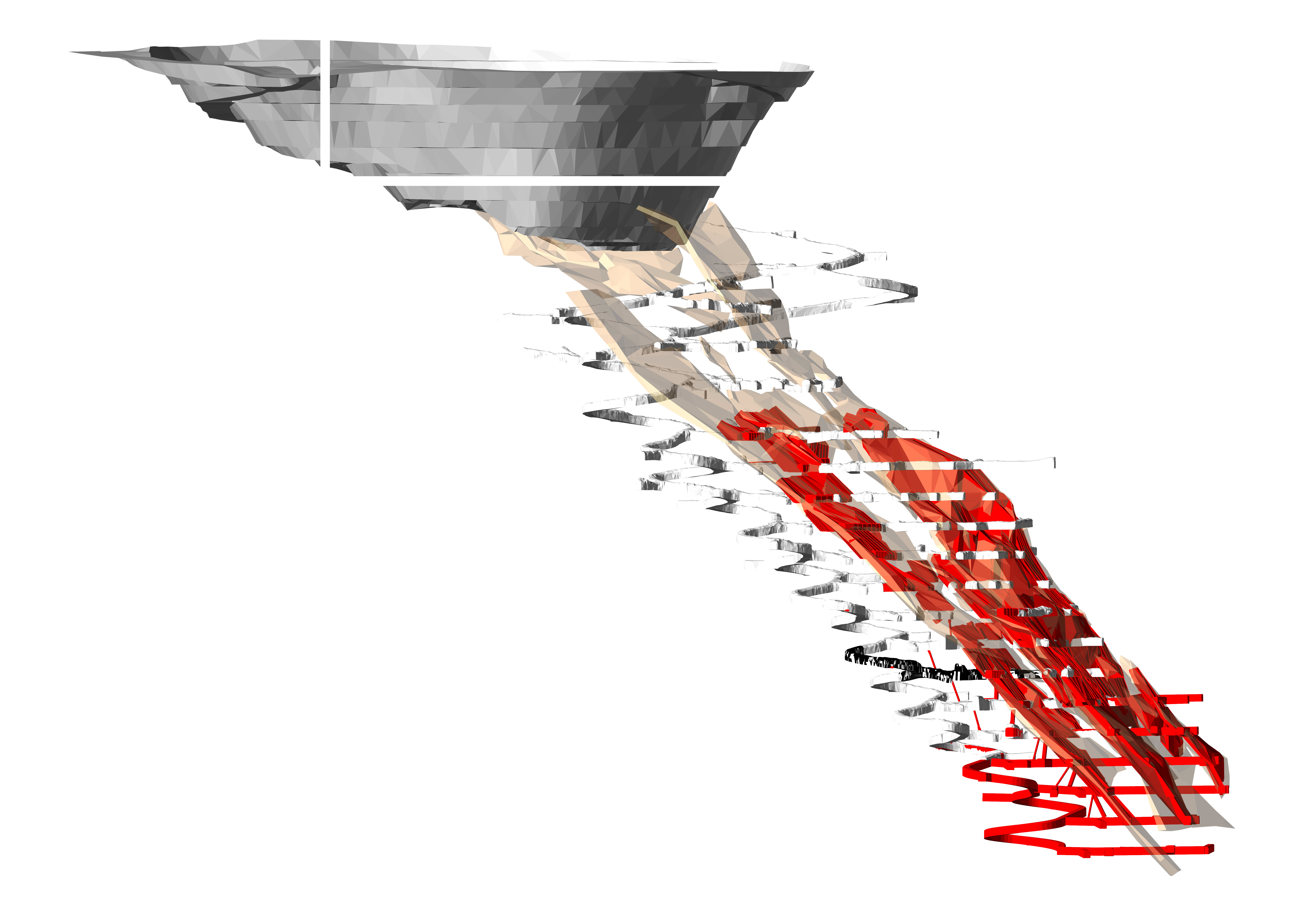 Plant throughput was a 5% improvement on the previous year, reflecting better ore delivery from the mines. Actual plant capacity is 1.7 to 1.8 million tonnes per annum, depending on ore hardness and variations in ore supply and quality.

Replacement of the cleaner and scavenger flotation cell banks with new tank bodies was completed during the year with mechanisms refurbished and transferred to the new bodies. Refurbishment of the insides of the primary rougher flotation cells will occur in FY2020.

The primary crusher, which had been operational from more than 40 years ago, was showing signs of damage and was replaced during the year with a new jaw crusher of the same size. The new crusher is now well-established and is performing as expected.

The tailings storage facility (TSF) stage five lift was completed as planned. Stage five construction has completed the final footprint of the TSF with the lifting of the TSF walls expected to be lower cost in the future as there will be only up-stream construction required.  Several reviews of the TSF were completed by State Regulators and Aeris’ own consultants.  The reviews have consistently rated the Tritton TSF structure as stable and low risk. Placement of tailings is well-managed and occurs in thin layers with rapid drying and stabilisation in the semi-arid environment.