Aeris has a number of prospective exploration tenements in NSW surrounding the current Tritton Copper Operations, collectively referred to as the Tritton tenement package.

To date over 750,000 tonnes of copper, including the Current Mineral Resource deposits has been discovered within the bottom half of the tenement package within a 50 kilometre corridor adjacent to a stratigraphic unit referred to as the Budgery Sandstone. Geological mapping has extended the known extents of the Budgery Sandstone unit a further 65 kilometres through the northern half of the tenement package, with potential to extend for a further 40 kilometres.The tenement package covers an area of 2,160km2 and is 100% owned by Aeris.  There is also a small tenement at nearby Canbelego held in joint venture (Aeris 30%) with Helix Resources. 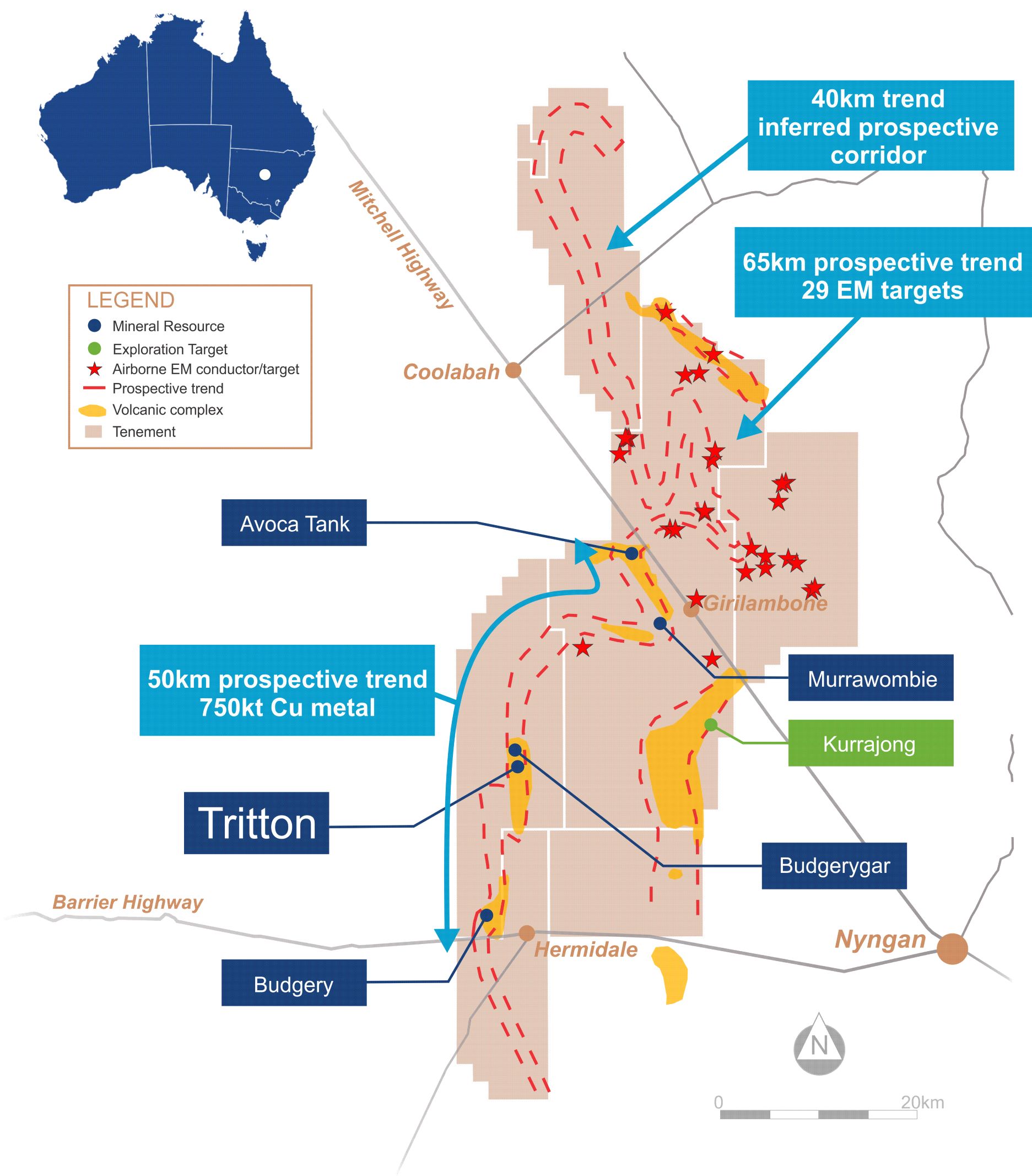 Greenfields and brownfields exploration at the Tritton Copper Operations (NSW)

The nearby Canbelego Project (Aeris 30%) is held through a Joint Venture  with Helix Resources.

The greenfields exploration strategy within the Tritton tenement package is based on growing the operation through the discovery of large Tritton or Murrawombie-sized deposits of more than 10 million tonnes.

Prior to 2016, greenfields exploration at Tritton was sporadic and punctuated with prolonged periods focused on resource definition drilling at the Tritton, Murrawombie, North East, Larsens and Avoca Tank deposits.  However, in mid-2016, Aeris commenced a strategic two-year $7.5 million greenfields exploration program.  The program, which commenced in November 2016 and ran until early in 2019, included:

The HP MLTEM survey completed over the Kurrajong prospect detected two strong bedrock conductors commencing at 400 metres below surface.  The detection of the plates provided the impetus to commence a limited drill program testing the potential extents to mineralisation intersected from previous drilling at the prospect.  The initial two holes (TKJD014 and TKJD015) targeted the interpreted mineralised extensions at 150 metres up and down plunge.  Both drill holes intersected massive sulphides:

These results were encouraging enough for Aeris to extend the drill program with a further 12 drill holes completed in November 2018.

The drilling program extended the limits of sulphide mineralisation to 300 metres along strike and 1,100 metres down plunge.  Within the large sulphide envelope, an exploration target was defined ranging from 3 to 4 million tonnes at 1.5% to 2.0% copper.

The Company has now commenced the process to obtain the necessary regulatory approvals to allow further drilling to occur at Kurrajong with the aim to progress the exploration target to an Inferred Mineral Resource. 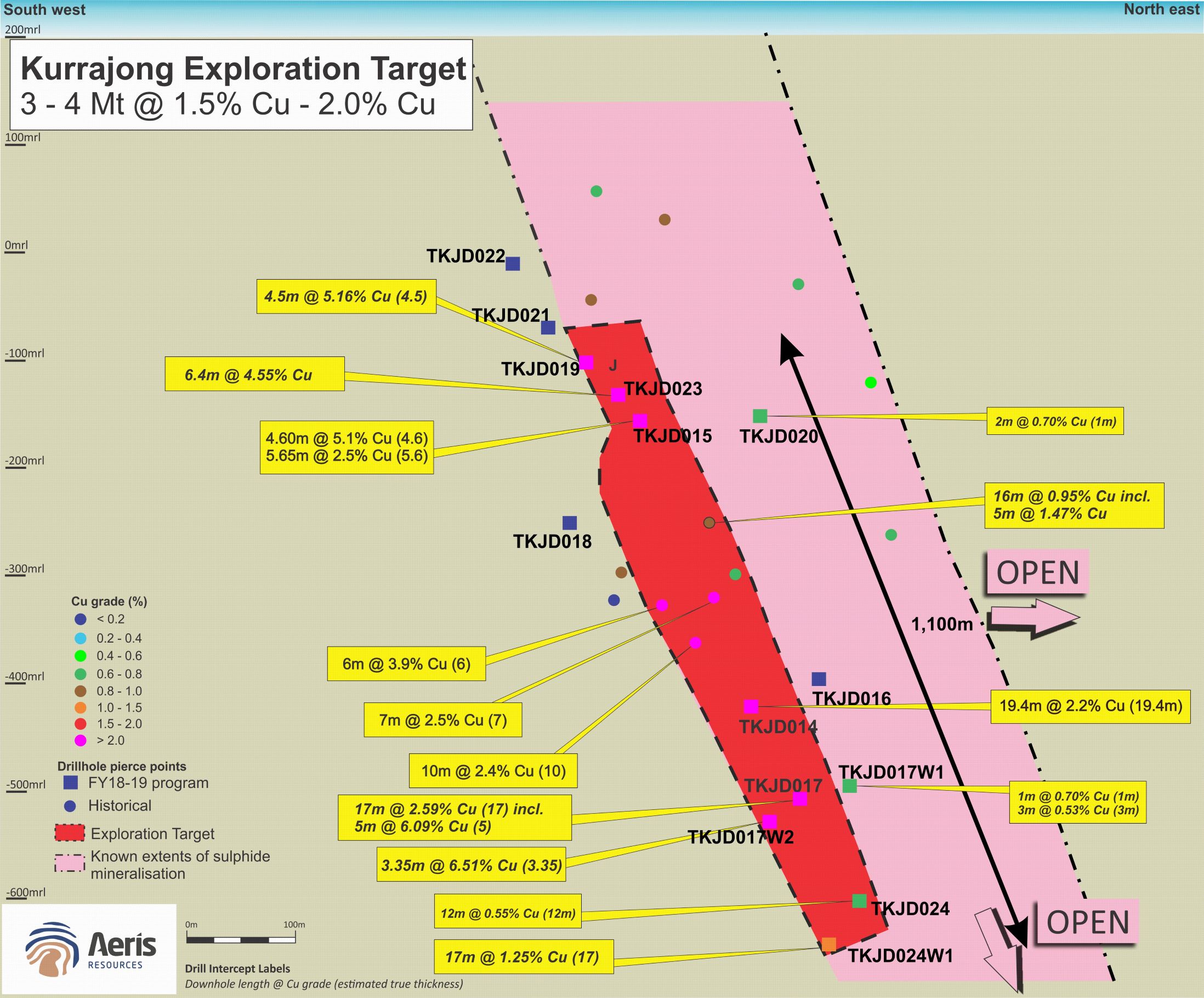 To date, the majority of the on-ground exploration within the Tritton tenement package has been focussed within the southern half, along the prospective “Budgery Sandstone” corridor between the Budgery and Avoca Tank deposits.

Recent regional mapping and follow-up geophysical interpretation over the northern half of the tenement package was successful in identifying the continuation of the Budgery Sandstone unit for a further 65 kilometres than originally thought.  Additionally, the prospective corridor was interpreted to extend a further 40 kilometres further north-west, into an area now covered by EL 8810.

An initial trial airborne EM survey was flown over selected areas in the northern section of the Tritton tenement package in January 2018 to determine the effectiveness of this method in the detection of potential bedrock conductors.  The survey was successful in identifying 4 new potential bedrock conductors along the northern margin of the tenement package.

A second airborne EM survey covering the remainder of the under-explored northern half of the tenement package (617km2- excluding EL8810) was flown in January 2019 and identified a further 25 EM anomalies, including 9 high-priority targets.  The airborne EM survey was flown using the SKYTEMTM 312 EM system, which is designed and optimised for deep conductor bodies.  This system enabled exploration to quickly and cost-effectively identify potential copper sulphide mineralisation.

Aeris’ exploration focus on the Tritton tenement package within FY2020 is principally within the northern half of the tenement package, evaluating each of the 29 EM anomalies identified so far and prioritising the most prospective for ground-based EM surveying, in preparation for first pass drilling.

Additionally, the Company will be drill testing targets within the highly fertile Murrawombie to Avoca Tank corridor.  Drill targets within this corridor have been derived from a detailed review of historical data and ground-based EM surveying.