Aeris Resources is a diversified mining and exploration company listed on the Australian Securities Exchange (ASX: AIS) and headquartered in Brisbane, Queensland.

Aeris Resources’ (Aeris or the Company) has two operational assets, the Tritton Copper Operations (Tritton) in New South Wales, and the Cracow Gold Operations in Queensland. In FY2021, Tritton is forecast to produce more than 23,000 tonnes of copper and Cracow is forecast to produce 70,000oz of gold. Tritton includes multiple underground mines (Tritton and Murrawombie) and a 1.8 million tonne per annum processing plant. Tritton also has a pipeline of advanced mining projects and a highly prospective tenement package covering 2,160km2, on which to date over 750,000 tonnes of copper has been discovered. Cracow is an established, high-grade, low cost underground mining operation and processing facility that has been operating continuously since 2004. Cracow has produced more than 1.4 million high-margin ounces over its life and has a consistent record of resource replacement.

The Company also holds 70% of the exciting Torrens Exploration Project (Torrens) in South Australia. Torrens is defined by a coincident magnetic and gravity anomalous zone with a footprint larger than Olympic Dam. Aeris commenced the Stage 1 diamond drilling program, targeting IOCG style mineralisation, during the first quarter of 2019 with two drill holes successfully completed to target definition by the end of the June 2019.

The Board and Executive team have grown Aeris into a mid-sized, multi-mine company. The growth strategy includes:
• Continued exploration within the highly prospective Tritton and Torrens tenement packages;
• Acquisition of the Cracow Gold Operations and tenement package; and
• Seeking opportunities to add value for shareholders through mergers and acquisitions, with a focus on copper, and other base metals. 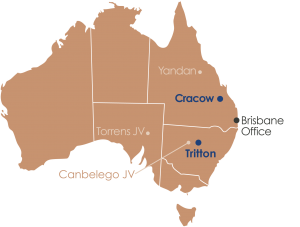