Aeris acquired the Cracow Gold Operation from Evolution Mining in June 2020. Cracow has a long history of resource and reserve replenishment and has consistently extended the life of mine, with a three to five-year mine life maintained since 2011.

All mining is currently by underground narrow vein methods. Historically, there have been open pit mines at several locations on the property with future production likely to come from a combination of underground mining and open pit operations.

The open pit projects being taken forward to prefeasibility study are:

Underground mine production is from several of the known deposits in the field all connected by underground drives to the one portal at surface. Ore is produced using narrow vein bench stoping, occasional cut and fill stopes, and up-hole retreat benching. Dry rock fill is used as the most common backfill. Where required, a cemented rock fill will be placed to allow for pillar recovery. The stoping method is described as Avoca or Modified Avoca depending on the access constraints.

Aeris has allocated $13 million for targeted drilling and near mine exploration, as well as a re-evaluation of material that is not currently in a resource category.

Aeris has a detailed exploration plan for near mine brownfields targets over a two-year period, and will be exploring greenfield targets in its highly prospective tenement package.

Resource definition drilling in the June quarter focused on testing extensions to the known mineralised systems at the Crown, Tipperary, Royal and Sterling deposits.

Drilling at the Crown deposit successfully intersected the mineralised structure down plunge beneath the current mined portion of the deposit.  The preliminary drill program intersected the mineralised structure over a 200m strike length and up to 80m down plunge below current workings.  Intersections occur within and below the reported Mineral Resource footprint.  Significant intersections include: 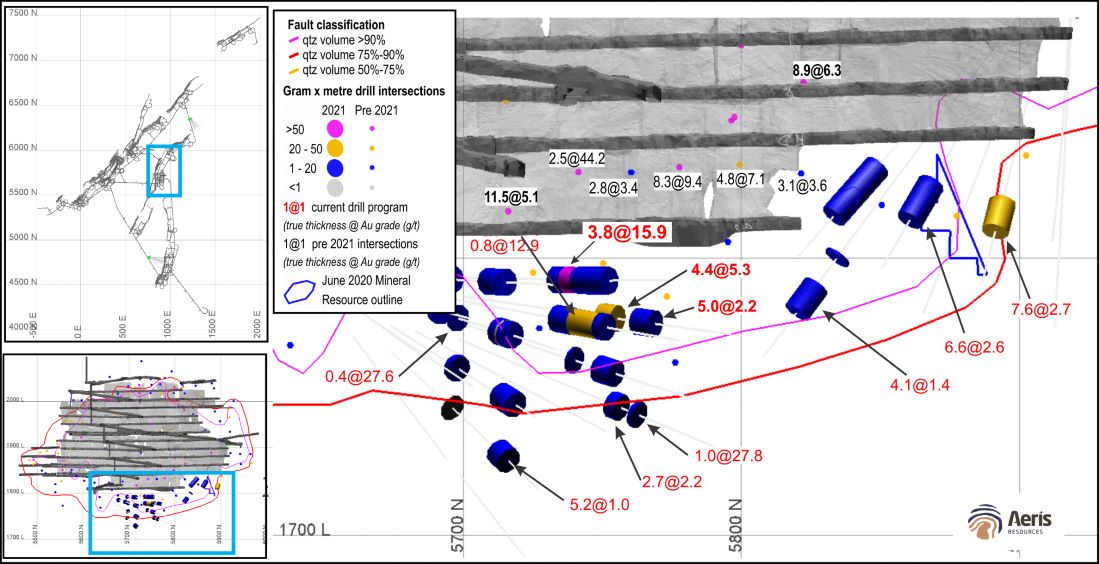 Long section view showing location of diamond drill holes completed or assays received within the quarter at the Crown deposit.

The Klondyke mineralised structure hosts the Royal and Cracow deposits, which combined have contributed approximately 800,000oz of gold via underground mining between 2004 to 2009.  These orebodies were hosted by competent (rheologically brittle) andesite lava sequences of the Permian Camboon Volcanics.  A thick, rheologically ductile volcaniclastic unit occurs below this favourable horizon and was believed to terminate economic ore shoot development on the fertile structures.

Recent radical advances in stratigraphic definition at Cracow have highlighted the presence of a competent basaltic andesite unit below the thick volcaniclastic unit, indicating the potential for re-development of economic mineralisation down plunge from known orebodies.

Limited drilling within the underlying volcaniclastic unit have intersected veining along the Klondyke structure.  Vein and geochemical vectors from those drill intersections indicate the fluids are still within the precious metal window conducive to low sulphidation epithermal mineralisation.

During the quarter an exploration drill hole (CRU171) was drilled from underground, targeting the Klondyke structure approximately 300m down plunge from previous drilling.  The drill hole interested the Klondyke structure at the interpreted position with stockwork quartz veining developed along the structure.  Based on quartz vein textures, wall rock alteration and geochemistry, the intersection is interpreted to be marginally below the low sulphidation epithermal window.  The drill hole does indicate it is possible further mineralisation could develop beneath the known ore shoots.  Along the Klondyke structure further drill targets have been identified and will be tested in FY22.

The Roses Pride high grade deposit represents the northernmost ore deposit mined at Cracow since modern mining commenced in 2004.  Underground activities at Roses Pride accessed and mined the deposit to 200 metres below surface.  Intermittent surface drill programs have been completed in the past, seeking to define up-plunge, near surface extensions to the Roses Pride mineralised system.  Prior drilling had been successful in intersecting the mineralised structure above and along strike from underground workings, however the results had not been sufficient to enable a Mineral Resource estimate to be generated.

Aeris announced on 31 August 2020, the results from the recent near-surface Reverse Circulation (RC) drilling program on the Roses Pride deposit.  The intent of the 2020 RC drill program was to systematically drill test the interpreted mineralisation above and along strike (north) of the underground workings.  The drill program was completed on a nominal 20 metres (strike) x 20 metres (down dip) spacing along a 400 metre strike length.

Assay results have returned for 4 drillholes from the 2020 RC drill program and are highly encouraging, with gold mineralisation intersected along the entire drilled strike length (400 metres). Significant drillhole intersections from the program include: 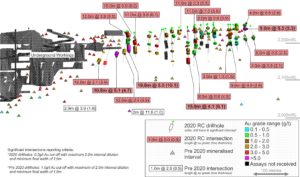 During the quarter a follow-up surface RC drill program commenced at the Roses Pride deposit.  The resource definition drill program is designed to complete infill drilling surrounding the previous drill campaign conducted last year, which led to the increase in the reported Mineral Resource at Roses Pride.  The drill program will also test for extensions to the mineralised system further down plunge below the current drilling footprint.

As announced on 6 January 2021, Mineral Resource Update, the increased Inventory is based on a combination of additional drilling data and an alternate reporting schema.

[1] Discrepancy in summation may occur due to rounding.
[2] Mineral Resource is reported within a nominal 2.2g/t Au cut-off shell.

[1] Mineral Resource is reported within above a 2.8g/t Au cut-off peripheral to current mine workings.

Resource classification was based primarily on drill density with some consideration given to the confidence of the model, geological complexities including vein geometry and continuity, faulting, assay variability.

An surface RC drill program was completed in June 2020 and was designed to test the up-plunge extents to the known mineralised systems above the mining footprint and outside the reported Mineral Resource (refer to September 2020 Quarterly Activities Report).  In total, 23 shallow RC drill holes were completed within the Klondyke to Royal corridor.  Significant assay results from the drill program include:

This additional drilling accounted for 5,042 ounces of the 27,261 total gold ounce increase in the updated Mineral Resource. 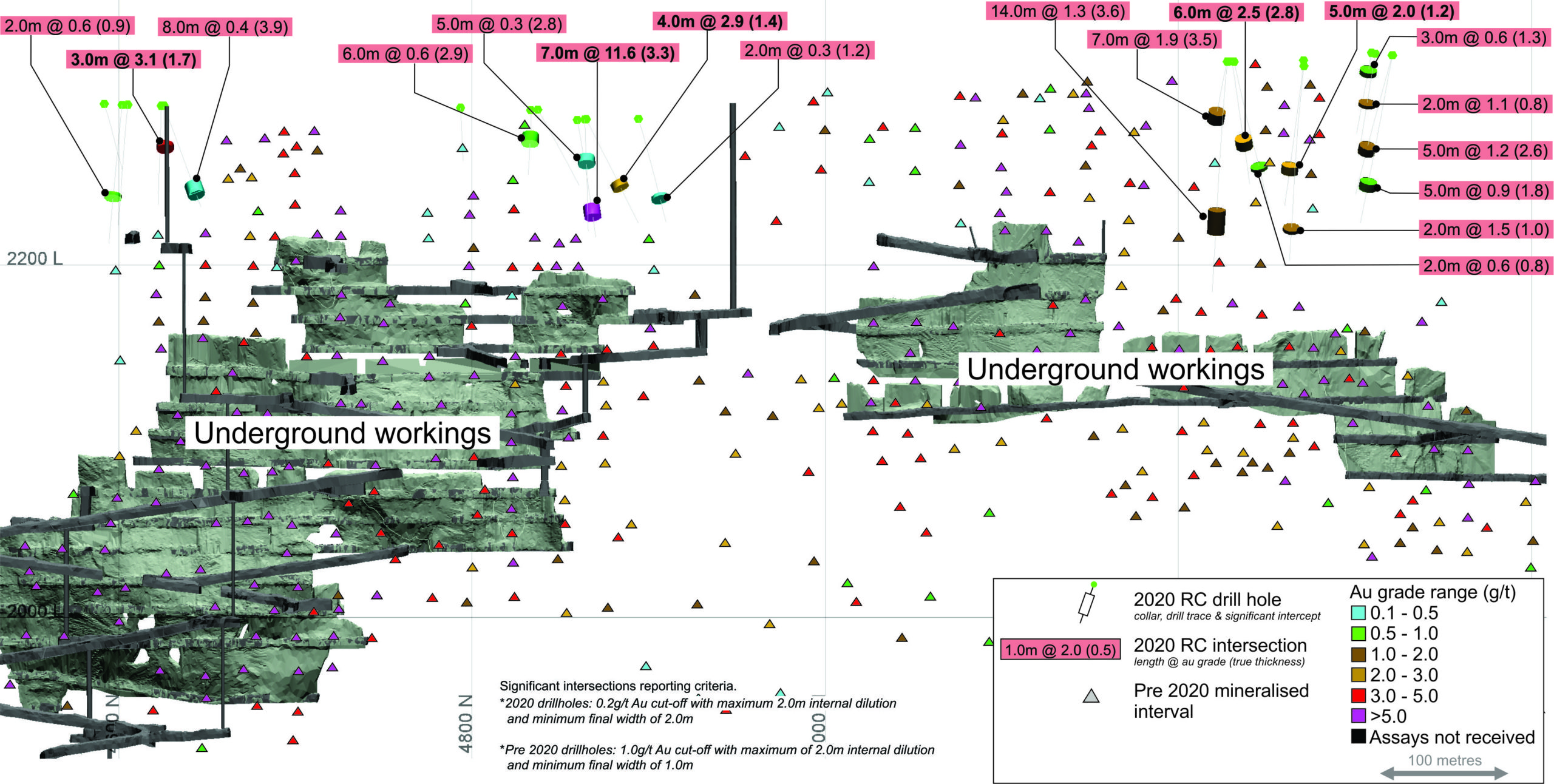 The Klondyke and Royal deposits are high grade shoots which form along the same mineralised structure.  The drill program was designed to infill around existing drill hole data above the higher grade Klondyke deposit and test the extents to mineralisation along the structure between both deposits.

[1] Discrepancy in summation may occur due to rounding.

[3] Mineral Resource is reported within a 2.2 g/t Au (Royal) and 2.8g/t Au (Klondyke) cut-off peripheral to current mine workings. Reported Mineral Resource was constrained within conceptual mine designs at a AUD$2,300 metal price. 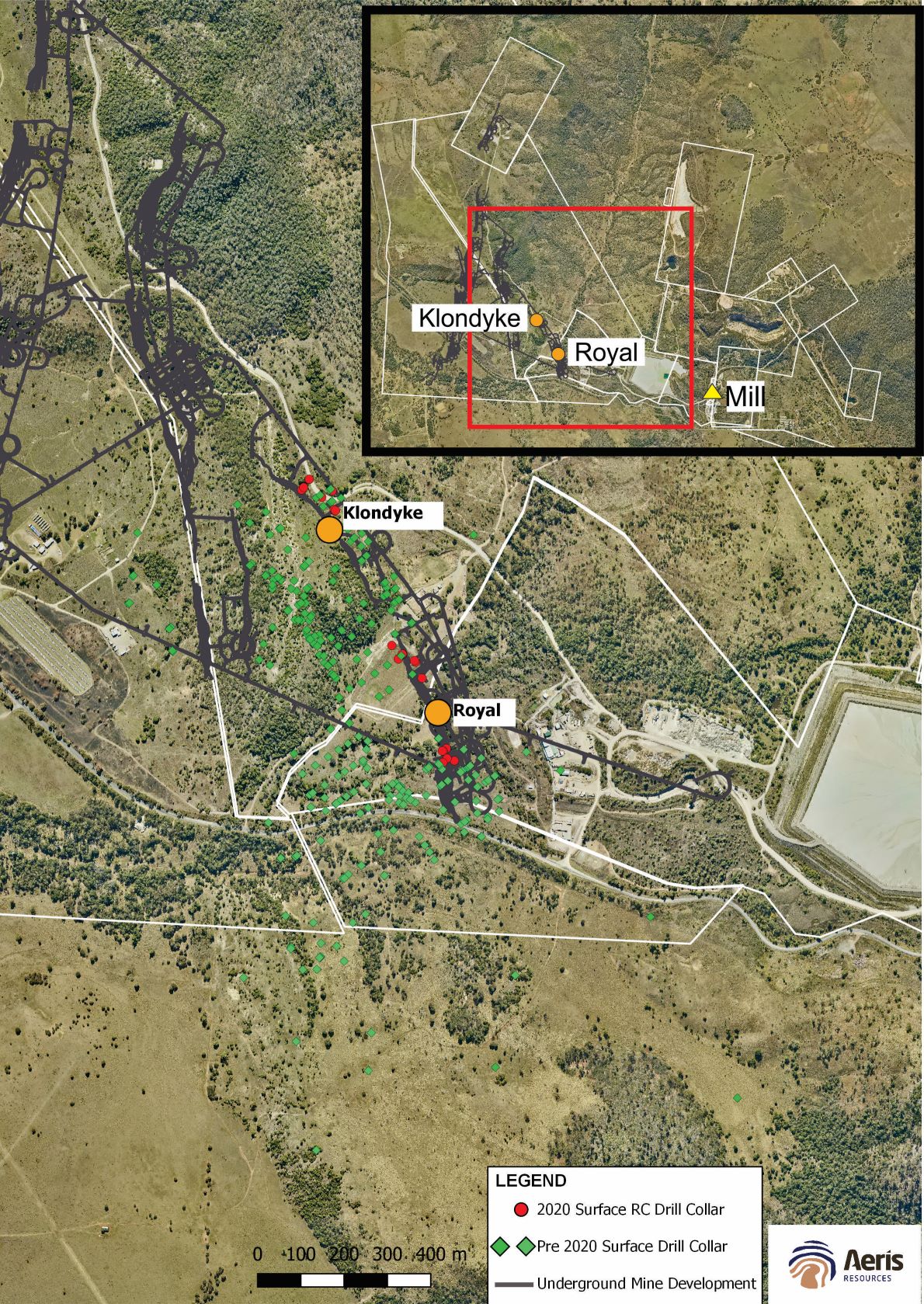 In the longer term, greenfield exploration opportunities will be developed through Aeris’ highly prospective tenement package, which remains largely underexplored.

The Cracow South West exploration target represents a potential analogue of the Western Field low sulphidation epithermal system which is has been the focus of underground mining activities since 2004.  The Cracow South West target has had limited exploration previously, principally because it is under several hundred metres of cover sequences.  Previous exploration including 2D seismic lines and a limited drill program were successful in identifying several fault structures with low level gold anomalism.  Aeris plan to complete a magneto-telluric survey over the area followed by a first pass drill program.

At the Boughyard target, a large (~3.0kmx1.5km) alteration system is open to the south and west. In the longer term, Aeris will evaluate the exploration potential of the highly prospective tenement package that includes the New England Fold Belt, where there is excellent potential for near mine and regional